I scream, you scream, we all scream…for BRUNCH!!! Ha ha, that one didn’t end the way you expected it to, did it? Don’t get me wrong…I love ice cream. In fact I could totally get behind a giant scoop of vanilla bean atop this amazing dish I’m about to share with you, but then that might be a little over-the-top. 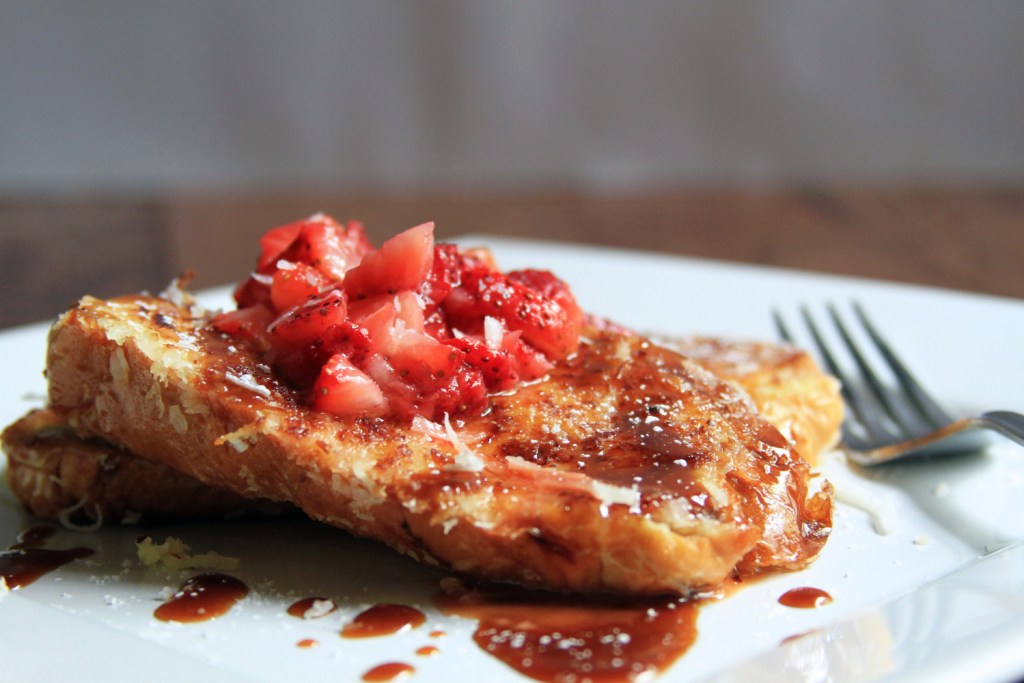 Brunch, a breakfast + lunch hybrid, continues to gain popularity each year (especially in the US), but to the best of anyone’s knowledge, it was a late 19th century British creation, historically reserved for Sundays. In a prophetic 1895 Hunter’s Weekly article titled “Brunch: A Plea,” Guy Beringer wrote, “By eliminating the need to get up early on Sunday, brunch would make life brighter for Saturday-night carousers. It would promote human happiness in other ways as well.” Anyone who’s ever indulged a little too much on a Saturday night and stumbled their way to a Sunday afternoon brunch likely knows the truth in those words. These days, countless restaurants offer brunch on both Saturdays and Sundays, and apparently “Friday Brunch” is a thing in Dubai now. Before long we’ll all be brunching seven days a week, and that thing called breakfast will become nothing but a tiny snack—a reward for early risers. 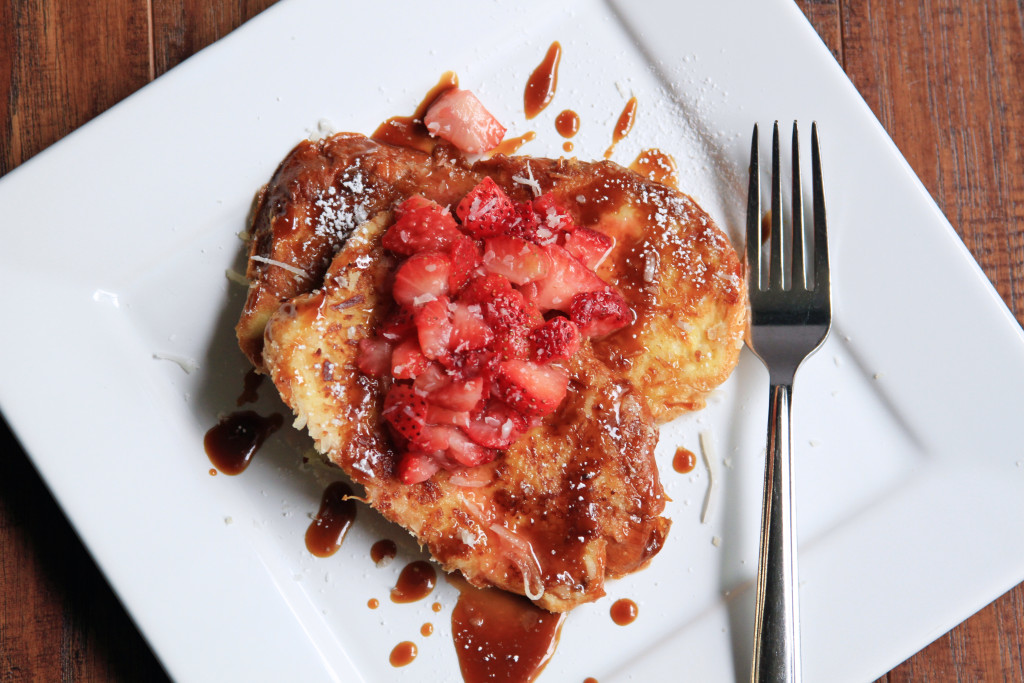 Like many things, Island Boy and I share a mutual admiration for brunch. For no other meal are the menu possibilities so endless, and when appropriately paired with a Mimosa, Bellini or Bloody Mary, what’s not to love? Heck, some restaurants’ bloodies are piled so high with meat, cheese and veggies, they’re practically brunch in and of themselves! Now it’s no secret that I love to travel–I would venture someplace new every weekend if I could, but when I’m at home there’s nothing better than sleeping in and hitting up one of the many Twin Cities brunch spots {of course the summer months require patio seating so #HaleyTheBeagle can accompany us}. There are a few exceptions, like the holidays when EVERYONE goes out for brunch (Easter, Father’s Day, etc.), when we try to steer clear of the madness and cook up something at home. 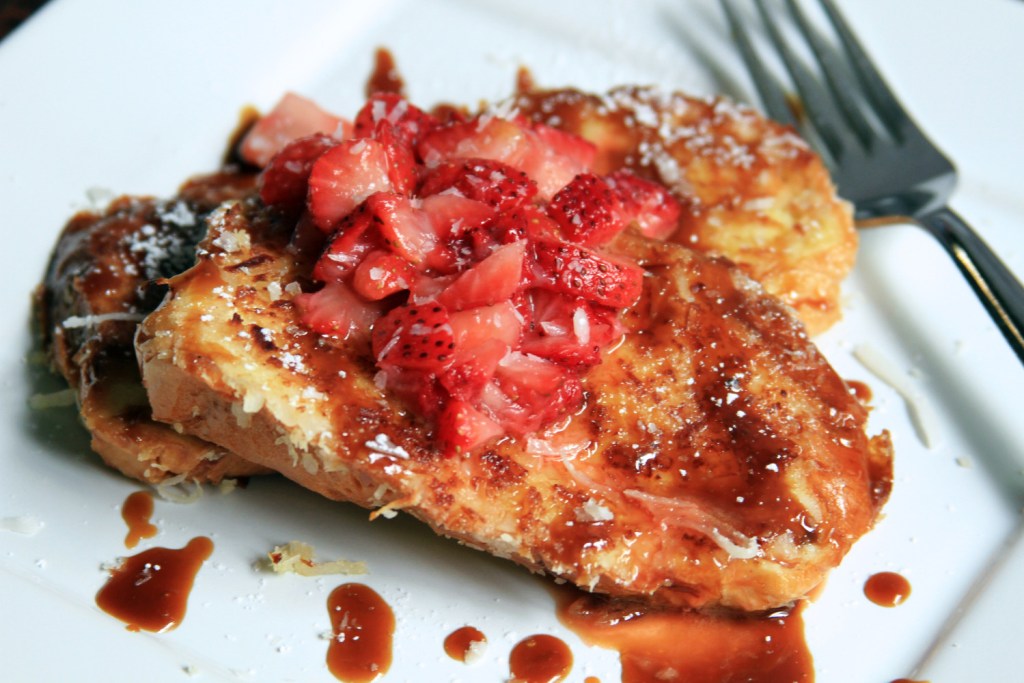 Speaking of holidays, since my mom is always going out of her way to make my life easier, I wanted to do something nice for her on Mother’s Day to show her how much I appreciate all that she is and all that she has done for me over the years. So what do you get for the greatest mom in the world? {Forgive me if I’m a bit biased.} I would love to send her and my dad on a much-needed vacation to Banff National Park (someplace she’s always wanted to go), but that wasn’t exactly in the budget this year, so instead I opted to invite my family over and prepare a special brunch for my mom, my 94-year-old grandmother and the rest of the troop. 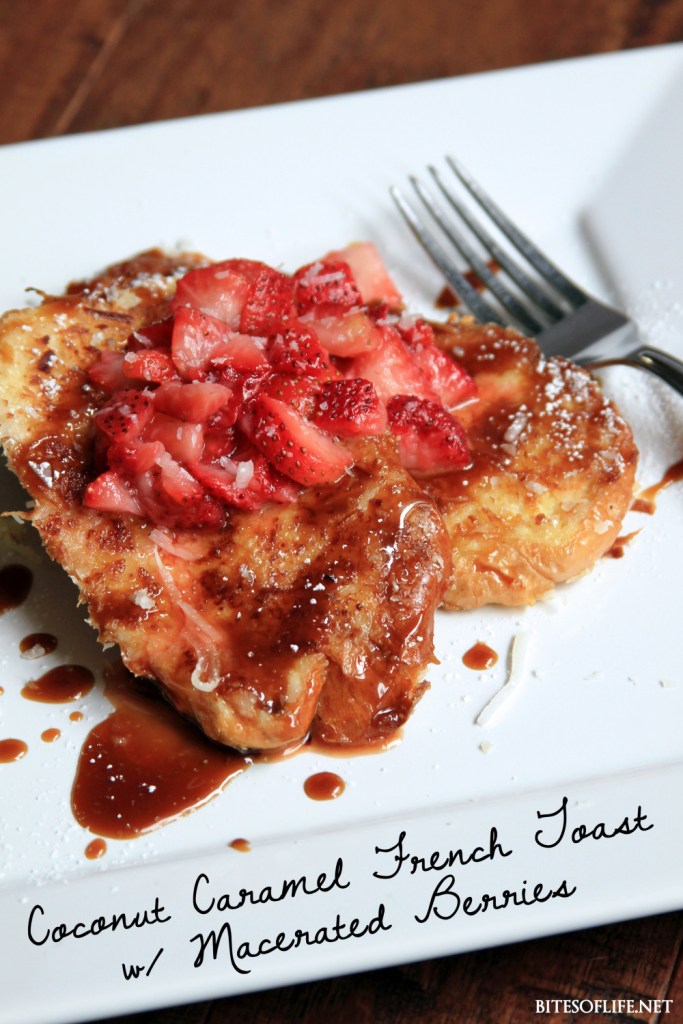 To avoid me spending 90% of their visit in the kitchen, I needed to prepare a dish that wouldn’t take all day. Hash is one of my favorite brunch options…one potato, two potato, red potato, sweet potato…it doesn’t matter what kind. There’s just something magical about a medley of veggies, meat and spices that have been cooked together…and if you stick an egg on it and maybe drizzle a little saucy sauce up in there…oh. my. stars. {as my mom would say} My mouth is watering just thinking about it, (although that could also be because I haven’t eaten in 10 hours, and writing about food makes a girl hungry). My go-to hash, amazing as it is, requires quite a bit of time to chop, grill, saute and poach (especially when serving a group), so I thought I’d come up with a recipe that was easier, yet equally as impressive. Little did I know my mom would proclaim it “the best French toast she’s ever had”! 🙂 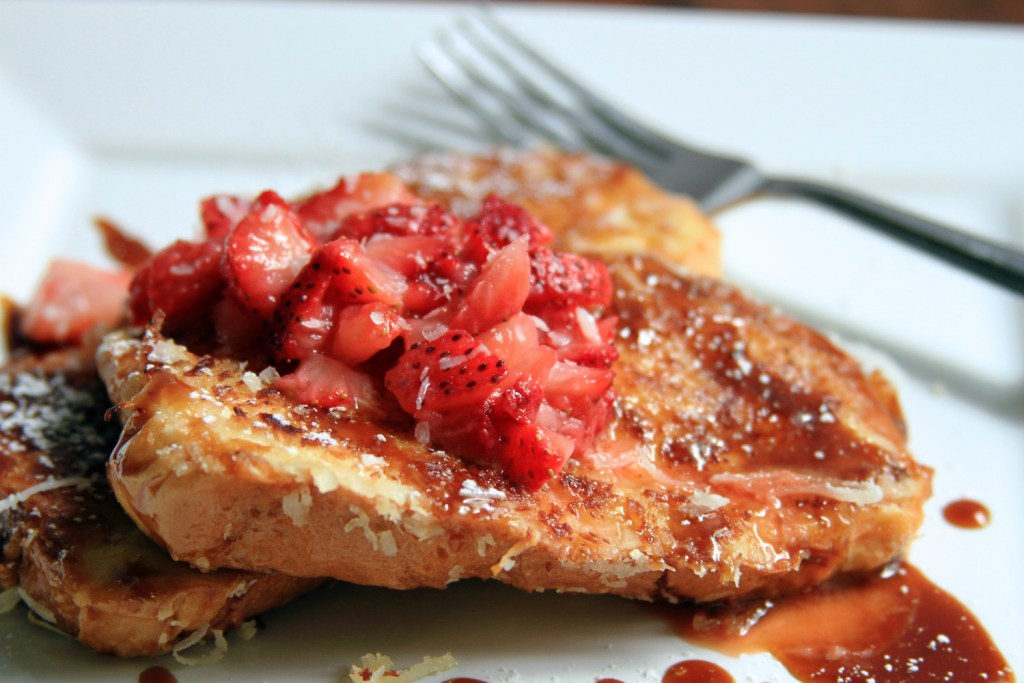 The basic foundation for any French toast dish is bread soaked in a mixture of eggs and milk, but since my family loves coconut, I decided to develop a coconut French toast recipe using coconut milk instead of dairy. I also wondered if I could create a decadently sweet dish without refined sugar. Challenge accepted. I tweaked the recipe for weeks…Kash, being the brunch lover and supportive boyfriend that he is, thankfully didn’t mind eating French toast twice a week. My first version {made with French bread and topped with maple syrup and blackberries} was delicious, but I thought it could use a little more oomph. So to amplify the coconut flavor, the next time I added coconut extract to the batter and swapped out the maple syrup for a quick + simple coconut caramel sauce…and with a total of 5 different coconut-derived ingredients, it was off-the-charts AMAZING! Then at the suggestion of my resident taste tester, I made one final adjustment and used challah instead of French bread…and I’ll be damned if it wasn’t the BEST IDEA EVER! The slightly sweet, pillowy loaves of deliciousness have a soft crust and absorb just the perfect amount of batter so they don’t dry out when cooked. It was so ridiculously good that even after the recipe was officially perfected, we couldn’t help but eat it almost every day! Now I’m sharing the recipe with you, so you can feed your brunch addiction too! I know, I’m such an enabler 😛 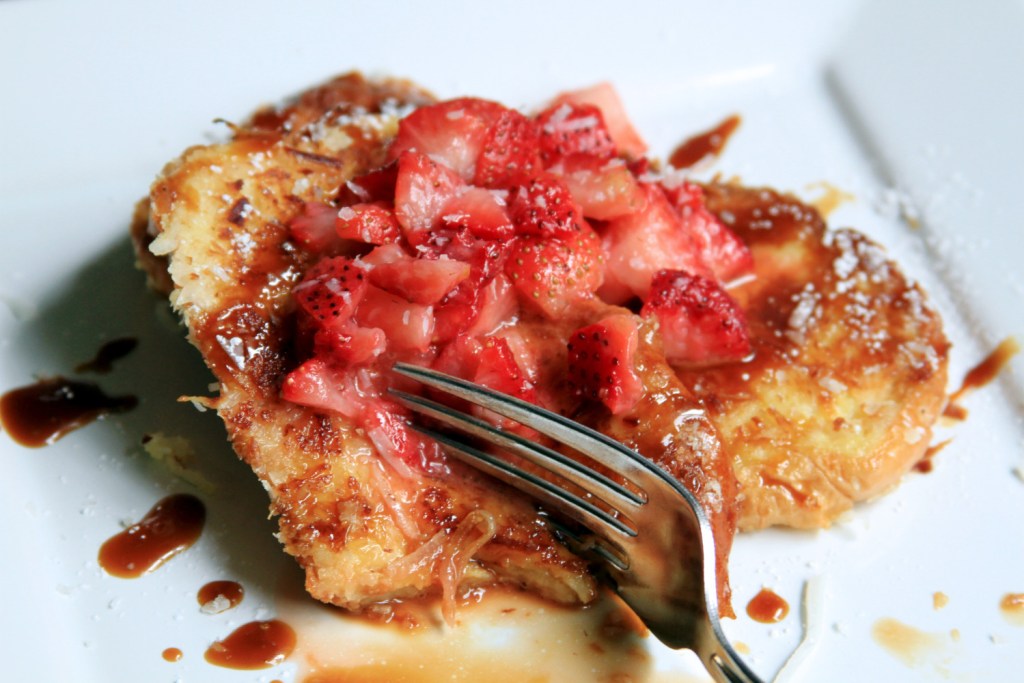 If you’re interested in what coconut-derived ingredients I use, you can likely find them at your local Whole Foods, or via the following Amazon links, with the exception of the organic virgin coconut oil (which I buy from Costco) and unsweetened shredded coconut (which I buy from Trader Joe’s):  So Delicious Coconut Milk (unsweetened) | Coconut Secret Nectar | Coconut Secret Crystals | Frontier Coconut Flavor

(Please note: Some links in this post are Amazon affiliate links, and I receive commission on products purchased through them, however, I personally recommend these items and appreciate your support. All opinions provided are my own.)