It’s that time of year again…when temperatures drop, snow falls and we all begin dressing in endless layers. It’s officially scarf season [finally appropriate for me to wear them daily] and most importantly…it’s SOUP SEASON!! 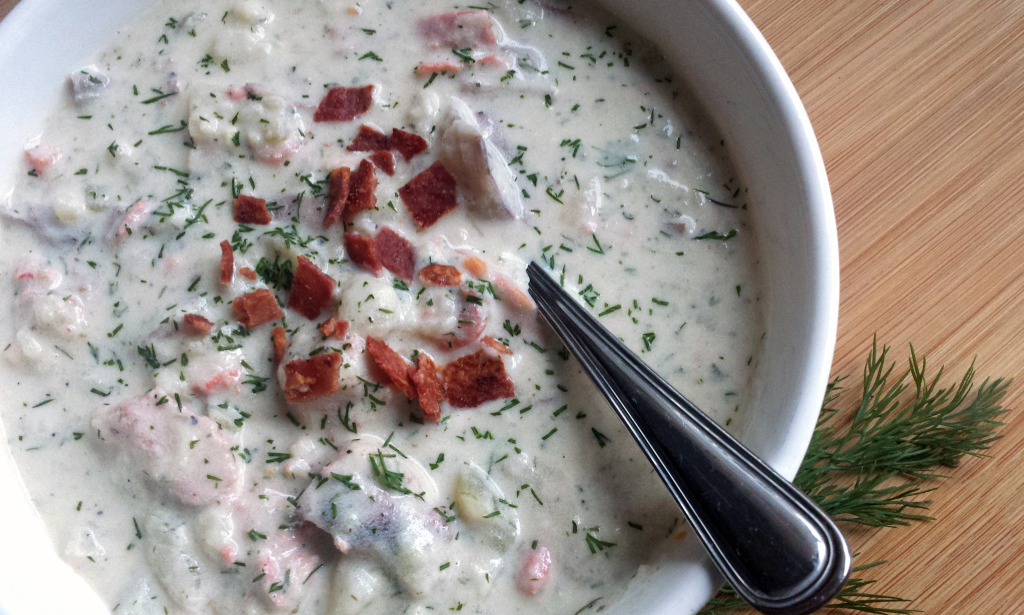 With all the different varieties, I think I could actually live on soup alone for the entire winter. As a kid, I didn’t fancy seafood [I know…blasphemy!], but I made 2 exceptions: tuna salad sandwiches (yes, that would be fish from a can), and my mom’s amazing clam chowder. You won’t find me chomping on a tuna fish sandwich these days, but I guarantee you can catch me daydreaming about that chowder. You see, my mom usually makes it just once a year—on Christmas Eve. So the other 364 days are usually spent anxiously awaiting that salty, bacony, potatoy goodness. I know what you’re thinking…I should just make my mom’s clam chowder to get my fix whenever I want, but I can’t help but feel like I’d be committing some sort of sin by serving it up on any day other than December 24th! It does feel a lot more like December around here after 9 days below freezing, so I whipped up the next best thing to keep us warm…a Salmon and Shrimp Chowder inspired by my mom’s Christmas Eve staple. 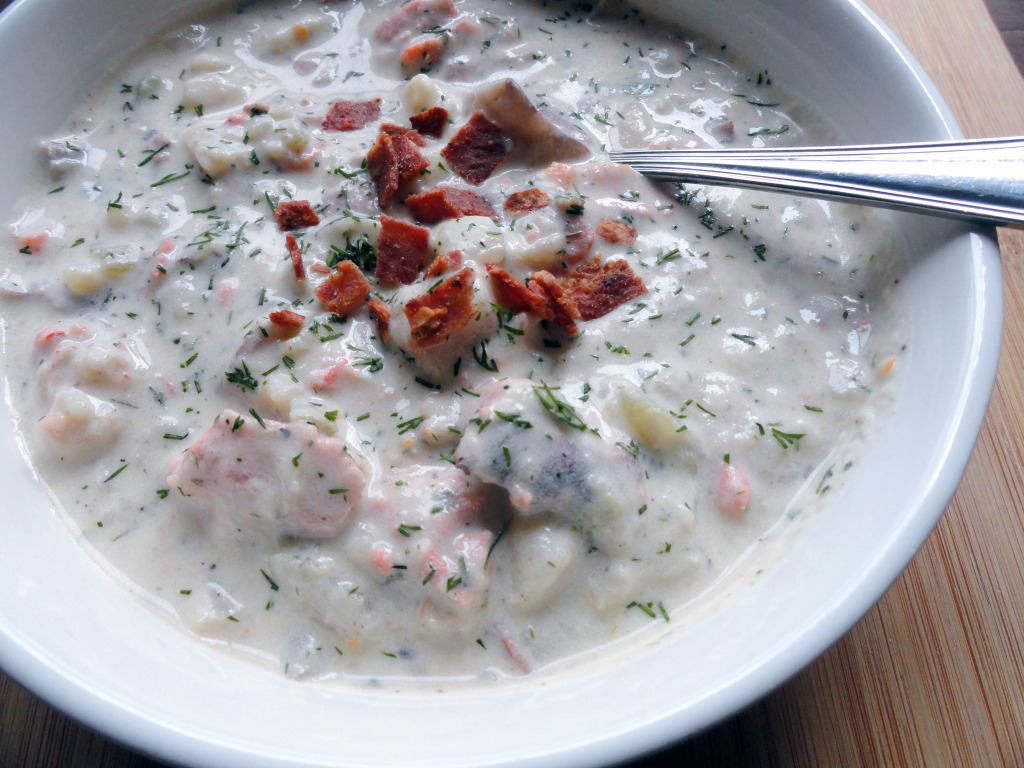 It’s got some of the great things about chowder (potatoes, cream and my personal chowder requirement—bacon), along with a couple surprises (like carrots and fresh dill). “Traditionally” chowder is thickened with hardtack. What is that, you ask? Hardtack is a very dry, hard bread or cracker historically used for sustenance during long sea voyages and military campaigns. It is common in disaster preparedness kits and hardtack (also referred to as pilot bread or sea biscuit) is still used to endure the rigours of remote transport in Alaska. Want to know a hardtack fun fact? Seabiscuit (the champion Thoroughbred racehorse) is named after his father, Hard Tack (sired by one of the greatest of all time, Man o’ War). Ok, that’s my history lesson for the day…now back to soup! 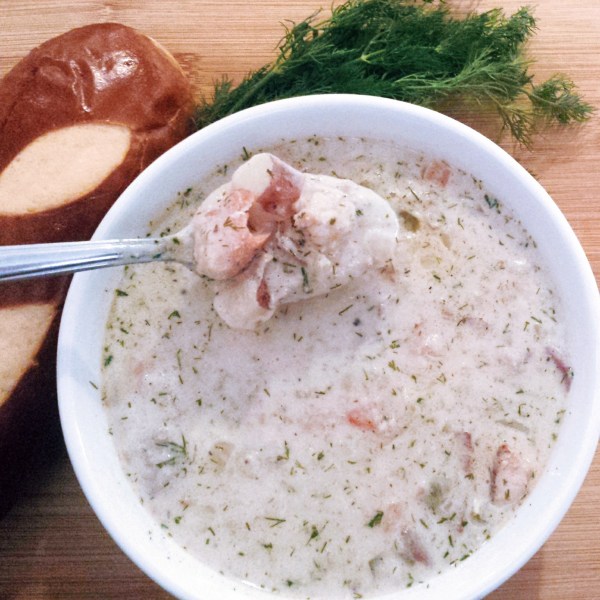 These days, instead of hardtack, chowder is frequently thickened with crushed saltine crackers or a simple roux (both often filled with gluten), but this recipe is gluten-free! I don’t actually add any thickener at all, but the trick is to use enough potatoes to break some of them down (almost to a mash consistency), thereby thickening the soup naturally. Although I don’t think there will ever be a contender to rival my mom’s clam chowder for the best ever…I think this at least deserves 2nd place. So today I share with you the Second Best Gluten Free Seafood Chowder…and as Jennifer Aniston in the 1997 flick “Picture Perfect” would say, “Number 2…and that ain’t bad”. We are fast approaching the 2nd longest streak in Twin Cities history of sub-freezing November highs, so I better go put on some more layers and warm up a bowl of this delicious chowder!! Enjoy! 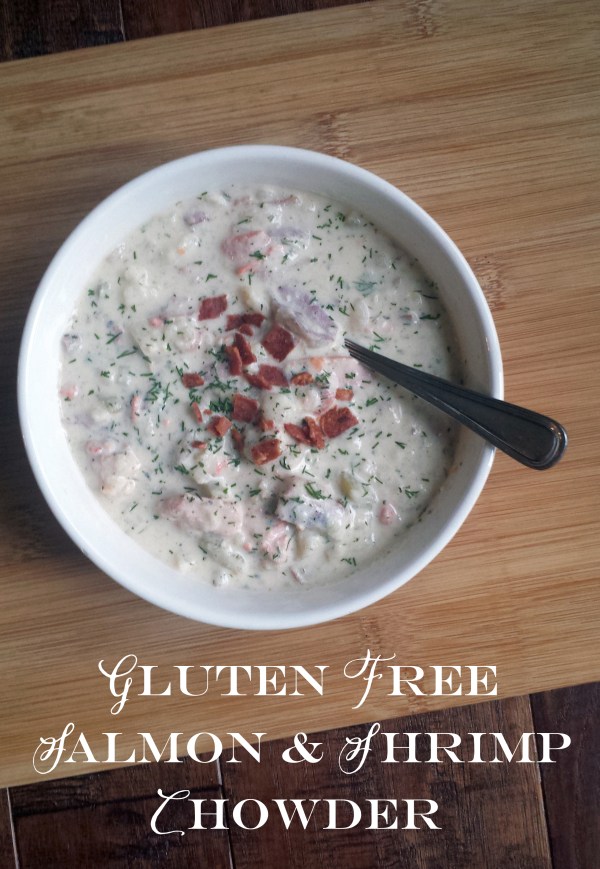 If you’re the soup + sandwich sort, grab this awesome eCookbook by From Away to find this chowder’s perfect match!